Whether dogs were domesticated during the Pleistocene, when humans were hunter-gatherers, or during the Neolithic, when humans began to form permanent settlements and engage in agriculture, remains controversial. Recently discovered Paleolithic fossil skulls, Goyet dated 31,680 +/− 250 YBP and Eliseevichi MAE 447/5298 dated 13,905 +/− 55 YBP, were previously identified as dogs. However, new genetic studies contradict the identification of these specimens as dogs, questioning the validity of traditional measurements used to morphologically identify canid fossil skulls. We employ 3D geometric morphometric analyses to compare the cranial morphology of Goyet and Eliseevichi MAE to that of ancient and modern dogs and wolves. We demonstrate that these Paleolithic canids are definitively wolves and not dogs. Compared to mesaticephalic (wolf-like breeds) dog skulls, Goyet and Eliseevichi MAE, do not have cranial flexion and the dorsal surface of their muzzles has no concavity near the orbits.

Morphologically, these early fossil canids resemble wolves, and thus no longer support the establishment of dog domestication in the Paleolithic. 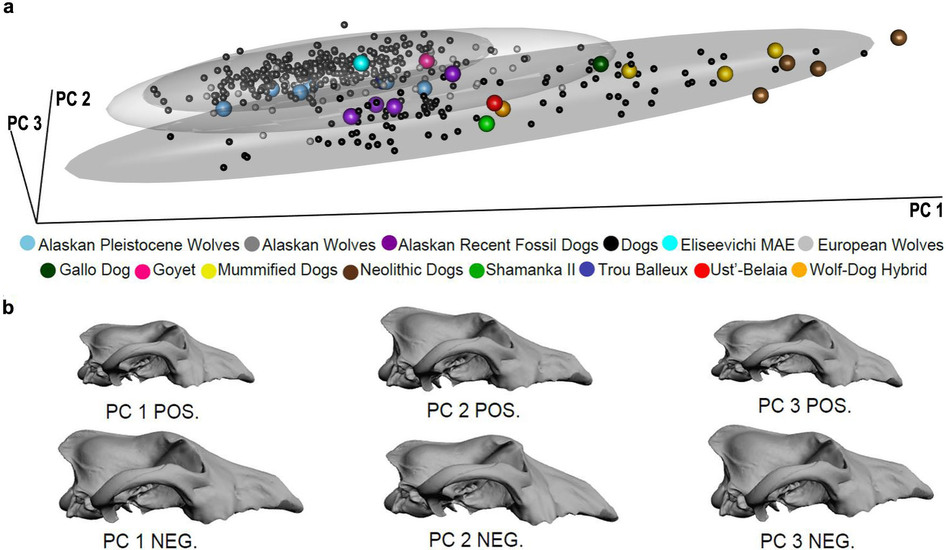